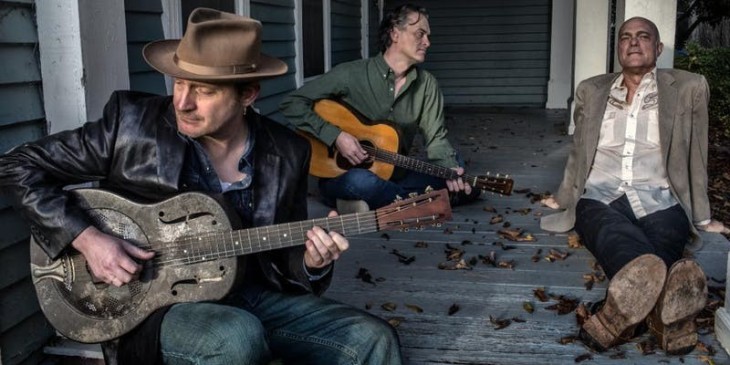 Tickets available in person from The Bruce (£10.00 per person) or via the following link (small booking fee applies):

An intimate gig with this stellar trio, with their distinctive styles, harmonies and storytelling, it's going to be one great show!

The new trio Eric Brace, Peter Cooper & Thomm Jutz is not really new at all.

Grammy nominees Eric Brace & Peter Cooper have created a body of work that reflects their journalistic sensibilities, a love of harmony and wry humor, and their deep respect for the masters that inspired them. Eric and Peter have recorded and toured together for almost a decade now, and their last two albums were recorded in Thomm’s studio, with Thomm in the role as recording engineer, producer, guitarist, and harmony singer. Whenever they could, they’ve taken Thomm on the road, a sideman extraordinaire whose sublime flatpicking guitar style elevates anything Thomm weaves it into. But Eric and Peter knew that Thomm was also a world class songwriter, and they kept twisting his arm to take front-and-center during their shows and sing a few of his own compositions. It was only a matter of time before the duo-into-trio transformation became official. It was a matter of making a record. Which they’ve now done. As a trio.

Called Profiles in Courage, Frailty, and Discomfort (no, really) the album is out on Eric’s East Nashville label Red Beet Records, and it’s 14 songs by all three members, tackling such weighty topics as moonwalks, steamboat captaining, dollar-slots, Johnny Cash’s gravesite, Jerry Lee Lewis’s birthplace, Willie Nelson’s notions of eternity, the downside of Parkersburg, West Virginia, and a Tennessee town flooded for the sake of electricity.

Eric, Peter, and Thomm each has something distinct and slightly skewed to say about the world, and when they bring their singular perspectives to the trio table, it’s a perfect example of a whole being much greater than the sum of its parts

Together, Eric, Peter, and Thomm weave stories, songs, harmonies, and guitar playing into something very special. The lyrics are as thoughtful as those of their heroes, a list that includes John Prine, John Hartford, Kris Kristofferson, Tom T. Hall, Paul Simon, and Townes Van Zandt. Add harmonies that bring to mind the Seldom Scene, Emmylou Harris, and the Everly Brothers, and sumptuous guitar arrangements, and you have a truly memorable evening of music.
Sign Up for news, offers and events